Gem Fairies in a forest of porcelain wares: Yarli Allison at Marchant.

Small in stature and dressed in traditional clothes, the brightly coloured set of god statues are handcraft treasures which were indeed inspired by the colours, shapes, and themes of the Kangxi era (1661–1722), a period of the Qing dynasty characterised by great prosperity and flourishing culture.

The fairies pose reassuringly, welcoming us into the exhibition – a forest of porcelain wares. The inhabitants of this locus amoenus, are the subjects of the classic ceramic repertoire: a lady in a sedan chair amongst all her attendants with a warrior and scholar; two birds on a branch amongst flowers, butterflies, dragonflies and other insects; two elegant women standing beside a pair of chickens in a fenced landscape scene. The Gem Fairies fit perfectly into this traditional bucolic setting.

Taking up to two days to be printed, the sculptures are then hand-painted by the artist. Similarly to their neighbouring vases, they boast the characteristic vivid green and yellow glazes of fine Famille Verte Chinese porcelain, prized for its unique iridescent, translucent, and colourful glazes. Upon first glance, the shiny veneer of the fairies is not unlike that of the vases that shimmer just next to them. However, it is interesting to notice that, although the process of 3D-printing is very controlled, the result is not. This is evidenced through the surface and texture of the sculptures, in which the artist’s hand always remains detectable. A tactile approach is adopted by Yarli as she constantly returns to her sculpture-installation background. Strong, raw, traces in her work emphasise accidents caused by human errors in the making, and reveal the Gem Fairies as an embodiment of the overlap of both the digital and physical world, symbols of artisanal craft and perhaps, humanity. Furthermore, the fairies host on their rounded surfaces a hidden poem, written by the artist herself in traditional Chinese characters:

My grandfather worked for the British to provide for his family

Powering the merchant steamship navy, (he) shovelled coal as a fireman

Its continuous soft steam smoke was spoken of generations after generations.

Paying homage to the Chinese stokers and labourers who helped the British Merchant Navy import goods into England from Asia in the mid-19th and early 20th century, the artist recalls a lost period of time and unveils narratives around the unseen and the overlooked. She alludes to the idea that without the historical merchant sea routes and colonial relationship between the East and the West, ceramic goods would not exist in modern-day Britain. There is thus a temporal link between the fairies and Marchant’s objects, as if Allison’s statues provide a conduit to almost two centuries ago allowing for the Famille Verte porcelain wares to be exhibited in London today.

Additionally, the jovial sculptures have been printed using a corn-based plastic which, if treated correctly, can become fully biodegradable. The impermanent potential of the item contrasts greatly with our natural tendency to possess objects and to preserve them for as long as possible. The material choice allows for the gods to be scanned and printed, thereby making them replaceable and transferrable, it also enables them to be mass-produced and recycled infinite times. Moreover, you could customise and print them anywhere, transcending geographic boundaries.

These internal contradictions also call into question the traditional sense of attachment and affection demonstrated towards clay-made god statues. Ceramic statues can last forever and destruction of their physical form is viewed as a sign of misfortune. Looked after by the entire family and preserved by being passed on from generation to generation, the intimate possession of these everlasting idols serves as symbols of luck and prosperity, a tangible connection to the spiritual world. In this sense, Yarli’s statuettes also raise questions of whether digital assets transferred into a physical form could provide similar emotional values as traditional objects when invested with a meaning. We are thus invited to consider this present-day matter and to think about our approach towards items, their materiality, and impermanence.

In the end, Allison’s pieces seem to represent almost a future adaptation of Marchant’s Famille Verte porcelain wares. Preserving their colours, shapes, and main characters while merging them with contemporary techniques and issues, Allison’s pieces create new and unexpected encounters. A rich and vibrant dialogue among art forms, techniques, materials, and histories is thus enacted within Marchant’s gallery spaces. 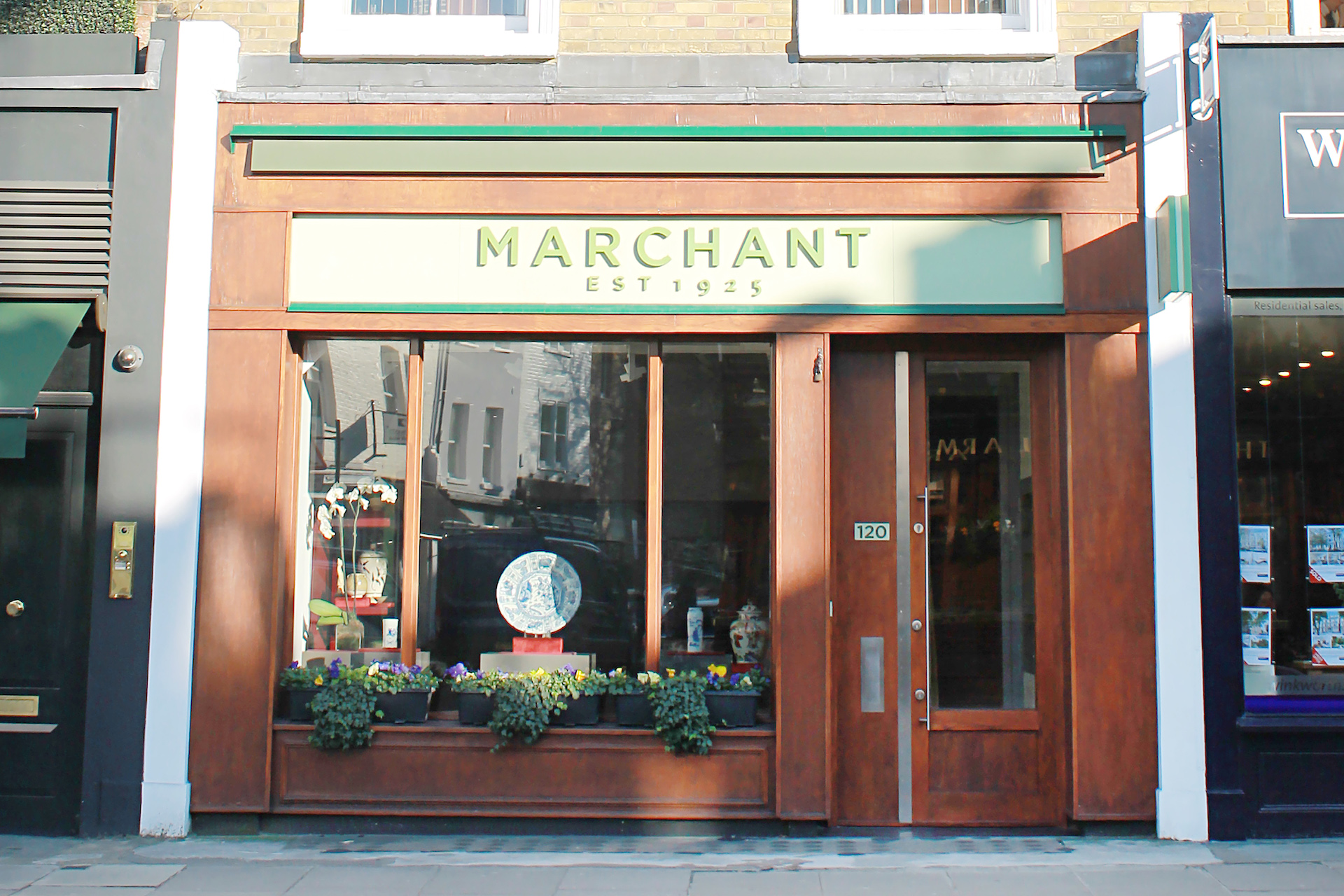 Marchant is a fourth- generation family-run gallery in Kensington Church Street, London, specialising in Imperial Chinese porcelain and works of art from the Ming and Qing dynasties.